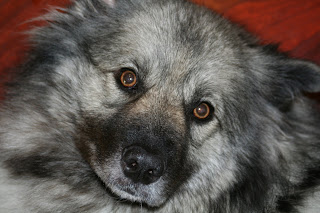 She's a Keeshond rescue. She was originally called Snuggle Bear. Obviously we had to change that right away.

Siska is a Dutch nickname for Francisca. Keeshonden were bred as watchdogs for canal barges in Holland, so we thought this was a good blend of new and old for her. So far she's sweet and cuddly--I thought about naming her Orbit because she is perpetually attached to my side, as if by gravitational pull.

Tank's OK with the whole thing so far. . . hopefully they'll be friends soon.

You can see pix of her and Tank in the
Picasa Web Album.
Posted by Clong at 2:47 PM No comments:

Another reason why I love SF

You can travel here for the Britney Breakdown Package, offered by Personality Hotels. It includes a gift certificate to a hair salon and H&M, as well as a bottle of Voss water. The Marc Jacobs hand mirror is especially apropos--didn't that guy just enter rehab too??
Posted by Clong at 10:55 AM No comments:

The Lede posts today about a conservative response to Wikipedia: Conservapedia, "a conservative encyclopedia you can trust." Wired reports that Andrew Schafly (son of Phyllis, natch) started the site "in conjunction with 58 high-school level, home schooled students from the New Jersey area."

Home schooled high schoolers. . . sounds like a great knowledge base!

As I'm reading some of the more hilarious quotes from Wired's piece, Brandon says to me: "Are we sure this isn't a joke?" Sadly, no. If you have some time to kill and need a good laugh, I suggest searching for homosexuality,
Bill Clinton, and the ERA (shout out to Mom).
Posted by Clong at 10:20 AM No comments:

Well, this story makes me feel better about attending a second-tier law school. The Washington Post reports on the site Autoadmit.com, which bills itself as "the most prestigious college discussion board in the world," but looks more like an online slambook for law students. And yeah, slambook. I am that old.
Posted by Clong at 11:34 AM No comments:

I wish I had originally named this blog Ann Coulter is a Bitch. What the hell is wrong with this woman?
Posted by Clong at 9:11 AM No comments:

The NCAA and Preventative Lawyering

Today's NY Times has an interesting article about colleges hiring law firms to investigate their athletic programs and ferret out irregularities and NCAA violations, presumably before the NCAA does.

Seems like a win-win--the NCAA is "certainly very busy" by their own admission, and potential for violations high--why not get ahead of the game (ooh, bad pun) and investigate yourself first? Violations can be corrected and bad actors weeded out, which benefits the program overall. Personally, I'm a fan of the proactive approach. Better that the entity takes responsibility for its employees and students and fixes its own problems in-house, instead of waiting for the NCAA to come around and slap wrists. I suppose there is an argument that only some schools can afford this type of action ($920k and $477k are two cost figures cited), but I think it's a matter of incentive. Schools that don't generate huge revenues from their athletic programs have less incentive to prevent NCAA sanctions, and are probably less likely to have a problem with violations, since their programs are smaller.

The article cites potential ethical violations because the lawyers heading the investigations are former NCAA officials. I don't really see a conflict--lawyers switch sides all the time, as long as they're not trading on work product or client secrets I don't see how this is a problem. In fact, it seems like an innovative way to control costs for the client while still making rain for the firm.
Posted by Clong at 9:41 AM No comments:

It's pretty ridiculous, but is it really any more so than the other "official days" we have here in the city? September 14th is AT&T's Your World, Your Language Day, January 24-30 is Zinfandel Appreciation Week (I bet that one was hard to get mayoral approval for), and then there's Shreve Jewelry Company Day, and my personal favorite, Steven J. Backman the Toothpick Artist Day. It appears that all you need to have a day named after you is a business presence in the city and some pull with your local supervisor. We've got a thriving porn industry and a large gay community, why wouldn't those interests have the clout to get a day named after them?

UPDATE: SFist has a hilarious list of their own proposed SFDays. My favorite is Fuck Bill O'Reilly Day. They
don't come out with the "Fuck," but of course I do.
Posted by Clong at 8:59 AM No comments: