Work on the floors has begun. The contractors put the plywood down in the media room, to even out the bare concrete floor that was under the carpet. It looks a little like a shooting rampage happened in there. . .the floor is littered with .22 caliber casings. Seems appropriate for Halloween. 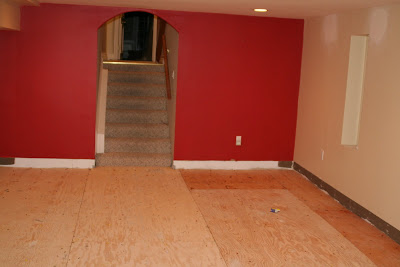 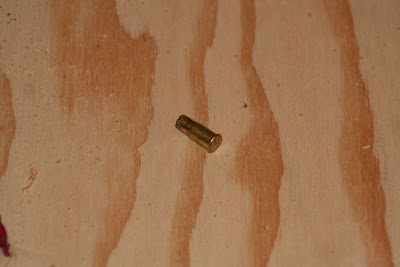 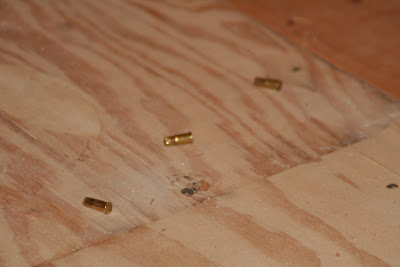 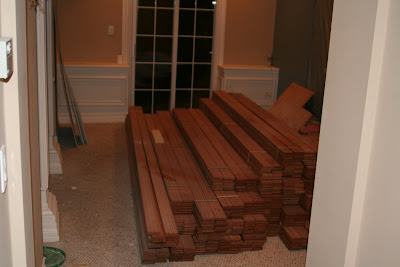 Don't lose your iphone. And not just because it's expensive--you will spend days trying to get the goddamn thing working again. I love my iphone, but all the SPECIALNESS makes it a complete pain in the ass to deal with if there is a problem.

I stupidly left mine on a plane, and a very nice gate agent rescued it, but I think I have spent about 5 hours total trying to get mobile again. In two days. Because if you read this blog, you know I don't really have anything else going on, right??

Monday, 3pm. Lose phone. Call ATT and ask them to suspend service. This they can do, but you lose all voicemail and access to the number. Fine. Also, I learned that once a SIM card is killed, it stays dead forever. No resurrecting or reusing.

Monday, 5 pm. Find old phone-- Samsung BlackJack-- which is an ATT branded product, and was previously registered to the same number, same network, everything. Yes, phone can be reactivated, but I have to bring it to an ATT store and pay $40 for a new SIM.

Monday night, 7pm. At ATT store. Get new SIM. Have to totally change mobile and data plan because iphone is SPECIAL and Samsung IS NOT. Phone appears to function.

Tuesday, 10am. Voicemail is not working. Gives busy signal instead. Call ATT and explain problem. They tell me that iphone has SPECIAL visual voicemail, so they need to turn that off and give me the NON-SPECIAL voicemail instead. Am perplexed as to why I was told all about how my data and calling plan had to change at the store, but they neglected to flag the more important issue of totally different voicemail requirements. 11am, fixed.

Tuesday, 3pm. Recover phone from airport. Totally unrelated clusterfuckiness ensues, but we don't hold Apple and ATT responsible, but rather UNITED. Am very tired of dealing with the issue so put off reactivating iphone until tomorrow.

Wednesday, 8am. Turn iphone on, tells me SIM card is not valid. Call ATT, who tell me just put the card from the Blackjack in, and everything will be great! Great! You know where this is going, right? Voicemail still no worky!

Wednesday, 9am. Call ATT to explain ongoing voicemail problem. They walk me through resetting the voicemail, and they supposedly re-enable visual voicemail, again with plan changes for SPECIAL phone.

Wednesday, 10:00am. OMGWTF voicemail still not working!! Come back to my desk to discover 4 missed calls, all from people I know would leave voicemail. I call the phone myself, and get a message asking me to re-enter the phone number I am trying to call. Fuck, call ATT AGAIN. This time get one useless tech after another, including an escalation rep who got pissy because I actually had a better grasp on the use of the phone than she did (and I am a tech idiot, where are they finding these people??)

10:30 am. Transferred to India, I mean Apple. Get a rep named Kim who asks me right out the gate "Are you familiar with our AppleCare program?" Probably not the best time to upsell, Kim. 40 minutes later and multiple test calls later, the problem is fixed. To her and Apple's credit, Kim is the most competent person I have spoken with so far. She sounds really relieved once the problem is resolved. I think she knew I was about 10 minutes from postal.

To recap: Still love my iphone, but am really questioning my devotion to it after spending 4-5 hours trying to get it working properly. For a product that prides itself on usability and out-of-the-box easiness, this is just stupid. I just hope the next time I hear the little Marimba ring tone it doesn't send me into pre-term labor or something.
Posted by Clong at 10:23 AM No comments:

So close. . .yet so far away. Things are at a standstill until the granite fabricators can get the countertops in here. They won't measure or put you on the schedule until the cabinets are fully installed (which was done at Week 4). The templates are complete, there's a little drama about the island piece, but if all goes well they will install on 11/5. Once the granite is in, the appliances, hardware, and tile can be installed, and we'll hopefully have a working kitchen by 11/9.

First, a view of the (almost) finished cabinets. 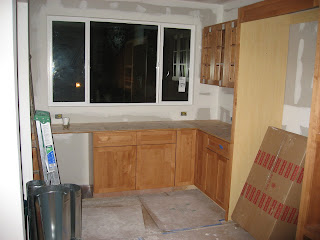 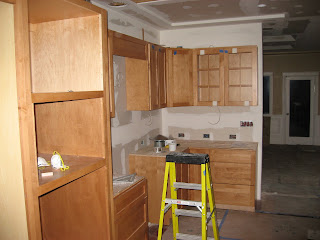 Next, today's view: drywall is sanded (notice the plastic covering everything, apparently that shit is DUSTY), walls ready to be painted. Despite the plastic, you can get a good sense for how the room is going to look when its finished. 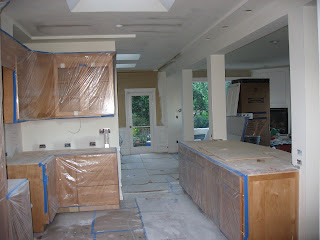 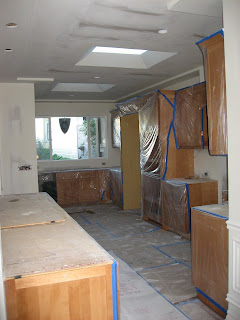 Here's where the hood will be. The contractor did a nice job of covering up the pipe [that would be a soffit, your construction term for the day]. There's a view of the little chimney through the skylight. 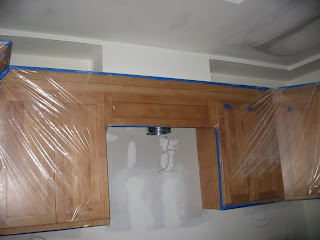 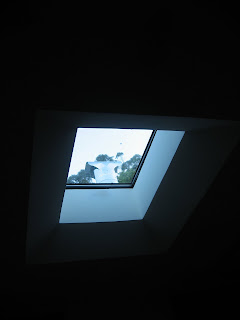 Views from the living room--island and dining room. 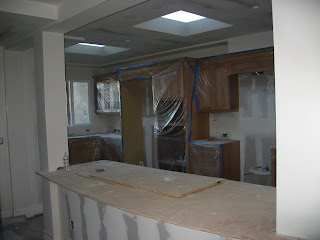 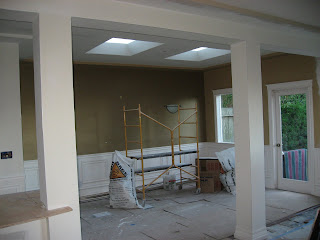 The drywall in the bedroom is also finished, and they are supposed to start on the floors down there tomorrow. This will involve the use of a .22 caliber nail gun to drive the plywood into the concrete floor base in the media room. The dogs (and neighbors) are going to love that!!!

Maxim has a great piece on perfecting that lovable douchebag Ann Coulter. Thought I'd repost since I can't stand the skinny bitch. Enjoy. 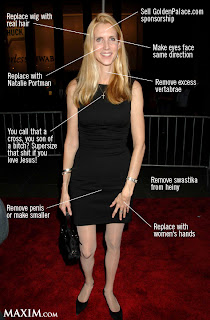 
Here's the island, viewed from the kitchen, near the sink. 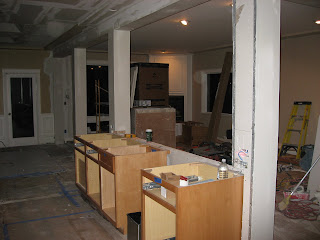 The same view--me and the Bump make a guest appearance. The look on my face pretty much says it all. 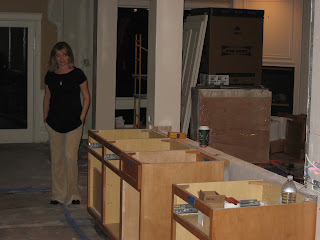 View of the island from the living room. 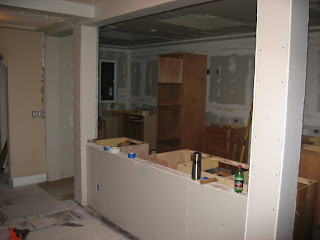 The sink will go in the cabinet below the window, and the refrigerator to the right in the empty box. The oven, microwave, and warming drawer will go in next to that on the right of it. 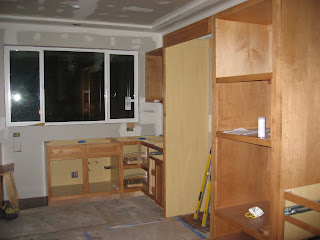 This is the corner on the right side of the kitchen--on the other side of the short wall is the dining room. 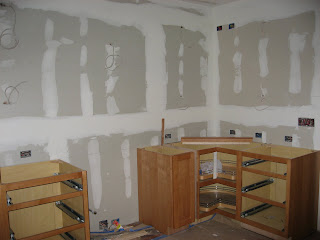 Stay tuned for more pictures, the cabinets should be finished by Monday when the granite fabricators come.

Sheetrock aka Drywall aka PROGRESS

Walls are going back up! My house looks like it's beyond the Green Zone at this point, but hey, whatever gets the job done. One nice touch was finding some dude's clothes in a pile by my front door. Classy! 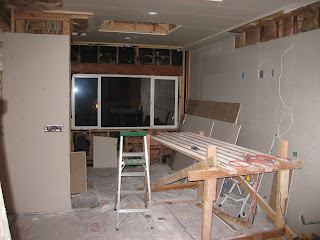 In this picture you can see the pony wall [this is my new favorite construction term. It replaces sheetrock, which is an awesome word.] where the plumbing is routed up for the island. 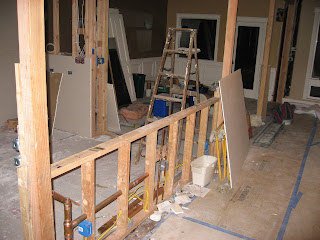 The skylights went in yesterday, which is good in case we get any more early rain. 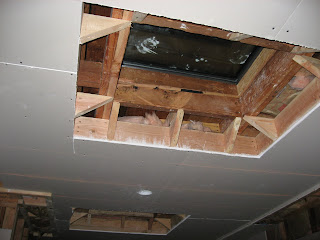 Another sign of progress--appliances were delivered. Most are in the garage but the wine storage is hanging out in the living room. 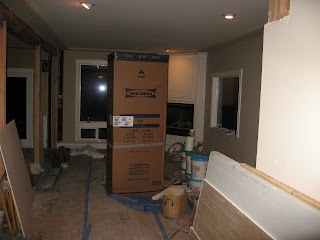